CREATED IN BIRMINGHAM
About us

A series of podcasts with Rosie Kay in conversation with figures from the academic, military and media spheres.

Rosie Kay Dance Company creates brave new dance in Birmingham that tours to audiences at home and abroad. We thrill and move a diverse public with relevant, important, political and meaningful dance responding to contemporary society.

We are absolutely delighted that Rosie Kay's Fantasia was picked as one of the top dance...
Read More

We are delighted to present and share our first annual report with you for the year 2018 – 2019:...
Read More
Best Independent Company

“a winning combination…tickling your senses of both humour and wonder.”
THE GUARDIAN

“An extraordinary exploration of modern war as a physical experience.”
THE INDEPENDENT

“a compelling work….astutely expanded version with its larger cast”
THE HERALD

Filmed in a real British Army drill hall in London in September 2017. Multi camera version and live stream commissioned by The Space.

The Body is the Frontline

In 2008, choreographer Rosie Kay joined the 4th Battalion The Rifles, to watch and participate in full battle exercises, and visited the National Defence Medical Rehabilitation Centre. What came of these observations was the award-winning, five-star work 5 SOLDIERS.

“An extraordinary exploration of modern war as a physical experience.” (The Independent), 5 SOLDIERS offers no moral stance on war, but instead questions what it is that we ask of our soldiers and explores how the human body remains essential to war, even in the 21st Century.

5 SOLDIERS has been touring since its premiere in 2010, in 2020 it opens in the UK before returning to the USA for the second time on its 10th anniversary tour.

★★★★★
“not only keeps us riveted, but helps close the gap of understanding between the armed forces and the general public.”

Amazing to see #Fantasia in @guardian Dance Critics #Bestof2019 choice for #Dance! Thank you! “Rosie Kay: Fantasia Dancing. To music. For fun. It’s not very “contemporary dance”, is it? Perhaps choreographer Rosie Kay is pulling our leg? Not at all: it turns out that she is simply going for broke. Three Amazonian dancers, costumed like kids playing dress-up, gleefully – and skilfully – romp through fistfuls of music from Vivaldi to Vaughan Williams, mimicking styles from moonlit romantic ballet to melodramatic Martha Graham. Cartoonish, yes, but it’s not parody – it’s pleasure. SR Read the full review.” . . . . . . . #dance #contemporary #touringlife #music #neuroscience #classical

Its raining outside. It frankly hasn’t stopped raining this weekend. There’s been a general election. I wanted to cheer myself up with a beautiful summer photo from when we visited Rouen on our ‘French cathedrals we love’ tour. . . . . . #springwillcome #sunshine #optimism #history #love

Incredible weekend at the Ditchley Foundation conference on all things about trust; in governments, politicians, leaders, business and media. Utterly fascinating, stimulating and met some wonderful people. A lot of things to take from it. . . . . . #trust #dance #conference #ditchleyfoundation #ideas

The very best 8th wedding anniversary (bronze) today @adams_resturant in #Birmingham today. Life just gets better all the time with this person. Thank you for everything.

We are delighted to announce that 5 SOLDIERS will be embarking on its 10th anniversary tour to Forest Arts Centre, Walsall and Capitol Theatre, Horsham in February 2020, followed by a 3 week US tour to Mondavi Arts Center, Artpower and Mesa Arts Center. #ThanksToYou we created #5Soldiers with support from Arts Council England. Thank you  #NationalLottery25 for a quarter century of supporting the arts in the UK. More info: http://www.5soldiers.co.uk/

The group start the show with some quick time marches around the square, for Day 2, this isnt bad, but we will be working on the 'HALT'!

Today we meet Olly Bell, who joins 5 Soldiers after being in the cast for 10 Soldiers earlier this year. Olly trained at Laban and graduated in 2017 before joining The Edge.

In the second 'meet the cast', we introduce the wonderful Frankie Hickman, who plays the role of Searg. He's picked up drill super fast, and is brining a lot of soul to his role!

This is us beginning the dreaded 'DRILL'- a complex 4 minute structure, that can be the make or break moment of the show, all within the first 10 minutes! Its a trial of memory, pattern and nerve.
Great work for day 1.

Jo Young I'm sure I nearly had this memorised at one point! .. or maybe not...

Angela Blair I loved this bit!

Day 1
Meet 5 Soldier cast member Alan Hunte, who joins the cast for the second time, since joining the company in Janaury 2019. Alan toured the UK, Denmark and USA in 5 Soldiers in 2019 and was a key part of the 10...

Our early Christmas present to you... 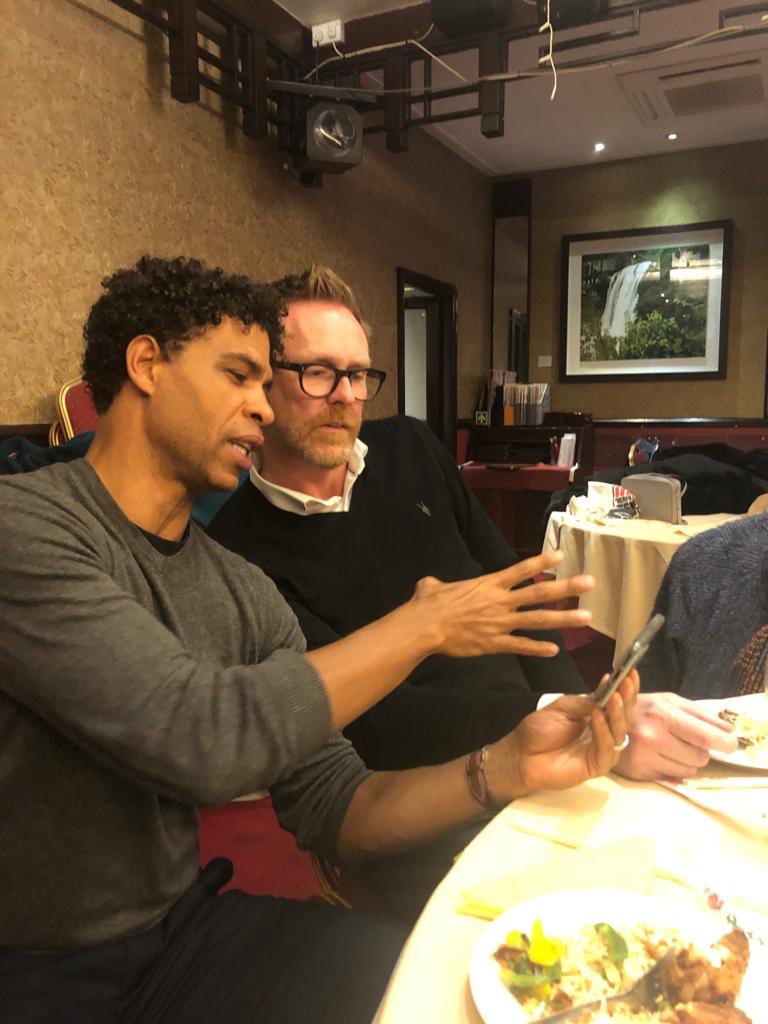 Culture Central @CultureCentral
This evening we’re delighted to co-host a Welcome to Birmingham dinner for @CAcostaOfficial with @BRB - a fabulous evening is being had by all!